HURDLES AHEAD FOR ADVISORS

As travel ramps up, travel professionals face a slew of challenges, including staffing shortages, burnout, high prices and low availability.

History has proven that the travel trade is a resilient group: From airline commission caps and cuts in the mid-’90s to 9/11, the Great Recession and more, travel advisors have overcome challenges to stand the test of time.

The pandemic presented perhaps the biggest test for the trade. First, there was the shrieking halt to all travel. Then came the rebooking cycle, again and again, often with no compensation for advisors, who are typically paid at or shortly after the client’s time of travel.

And although many signs are now pointing to a period of meaningful recovery — many agencies are busier than ever — serious challenges remain.

First, the good news. Recent data from Allianz Partners, which analyzed over 1 million travel itineraries, found that summer travel will be up 16% this year compared with the last, and travel to Europe this summer will soar 600% year over year.

The same poll asked advisors to identify the biggest challenges on their path forward.

One simply responded, “Everything.”

From staffing issues throughout the industry, to burnout, to pricing and availability, here are the largest hurdles advisors identified for the months and, likely, years to come.

One of the most consistent issues advisors identified in the poll was related to supplier staffing levels. Advisors are waiting on hold, often for hours at a time, to speak with a supplier representative. And when they do reach someone, they are often new and not trained as well as representatives used to be.

Among the descriptors for the phrase “long hold lines” offered by respondents: “frustrating,” “ridiculous,” “enormous” and “excessive.”

“I’ve spent hours on hold for cruises, tour operators and airlines — one time it was over 10 hours,” wrote Geneva Raye Hayden of Triple R Travel in Ocala, Fla. “I’m ready for that part of things to get back to some semblance of normal. Time is a terrible thing to waste.”

“The biggest challenge is actually just getting the business done, because the suppliers that we’re working with are trying to rebound, and that’s giving us all kinds of tactical issues,” Schreiner said.

Long hold times await an agent trying to do, well, almost anything offline, she said: get a quote, facilitate special booking requests and beyond. It’s rare to find a supplier without hold times of several hours.

In fact, while talking to a Travel Weekly reporter,
Schreiner was also on hold with a cruise line. (“I’m not even worried about it, because they’re not going to answer for at least an hour,” she said.)

It’s clearly a staffing issue on the supplier end, but adding to the frustration is the level of training new hires have undergone, Schreiner said. Often it means being put on hold, again, to wait for a manager.

Some brands have given their business development managers the tools and access to assist advisors when needed. That’s been helpful, Schreiner said, and builds loyalty with those brands. But many others have not.

“I think it’s an issue for our entire industry — hotels, airlines, everybody, even the tour companies,” said Angie Licea, president of Global Travel Collection, an Internova brand. “Trying to find talent. Trying to get them trained. You know, there were a lot of people, I think, that exited the industry.”

Especially in the luxury sector, said Jack Ezon, founder and managing partner of New York-based Embark Beyond, working with new staff members at hotels and resorts has been challenging.

“They’re not used to luxury,” he said. “So many people have left the industry that we are working with a new set of characters who are not used to doing business the way we do.”

Labor shortage for agencies and beyond

Staffing isn’t just an issue with suppliers, of course. Agencies are also feeling the pinch. In fact, the boom in travel, combined with staff shortages, means that agencies are in some cases turning away business they don’t have the bandwidth to handle.

For instance, Licea said, Global Travel Collection has been looking for an advisor who specializes in the Worldspan GDS “for weeks and weeks and weeks.”

“We’ve had a two-year low, and now not only are we trying to get up to speed really fast and start working at the pace we used to, but now we’re trying to find people, too,” Licea said.

Mike Cameron, CEO of Christopherson Andavo Travel, said in response to Travel Weekly’s poll that it was difficult to hire fast enough to meet customer demand.

“We’ve hired more employees in the past 90 days than at any time in the history of our company,” Cameron wrote.

Stephen Scott, founder and CEO of Travel Hub 365 in Chicago, also said staffing up quickly has been a challenge. Scott’s business focuses in part on corporate and entertainment accounts, which were largely dormant for two years until ramping up recently.

“The hard part is staffing, understanding that corporate is like a revving engine. Once you get that engine started, it’s rolling, it’s constant,” Scott said.

Staffing issues in destinations have presented their own challenges. Properties are also having issues ramping up, and staff levels are lower than they have been historically.

“Things are so overpriced and understaffed,” Ezon said. “Setting expectations for clients is challenging when they’re spending $2,000, $2,500 for a room that three years ago went for $400 or $500, and there’s half the number of staff. They can’t even get a drink by the pool.”

“And is the service and experience matching the price increase?” she asked. “In some destinations, not everything is open yet, and there are reduced service levels, yet the pricing is high. Travelers want to travel, and they are happy to pay, but at some point, will you be priced out of the market?”

Securing decent rates, or even space, this summer in Europe has been next to impossible, according to Tully Luxury Travel founder and CEO Mary Jean Tully.

But even hotel pricing is inflated. Tully cited a hotel she often books in Florence, which was typically around $800 per night pre-pandemic. Now, that same hotel is $3,000 per night.

Adding to the complexity is dynamic pricing, coupled with inflation. Prices are jumping, Ezon said. A quote given to a client today might be significantly different just a week later.

Though many Covid protocols, especially in the U.S., have been rolled back, there are still changes advisors need to keep track of. And when they sell the entire world, it’s a lot to keep straight.

“As the world emerges from the last two years of a global pandemic and shifts to an endemic mindset, we still need to have accurate information on testing, vaccination status, and travel restrictions,” said Jennifer Wilson-Buttigieg, co-president of Valerie Wilson.

Not only are the changes a lot to keep track of, but they present a challenge to advisors, who are seen as travel experts by their clientele, said Jennifer Doncsecz, president of VIP Vacations.

Even if an agent waits until two weeks prior to a client’s departure to share important information on entry requirements, everything could change after that.

“Many times it changes for the better, but it’s still, like, we want to come across as being the advisor and knowing everything,” Doncsecz said, “and it’s this continuous cycle.”

It presents more work for the advisor, Doncsecz said, especially if the client isn’t in a sun-and-fun destination where testing is readily available at many properties.

It’s also an inhibitor for some travelers.

“It’s not the fear of getting Covid, but rather testing positive while traveling, requiring quarantine and a delayed return home,” Valerie Wilson’s Wetty said. “Many clients factor this concern into their travel decisions.”

After more than two years of dealing with a pandemic and its associated complexities, many advisors are feeling stress and burnout.

“Even though the pandemic may be coming to an end, and it’s moving to the next evolution, the fact is travel is still more complicated than it’s ever been to book,” Licea said. “It still takes a lot longer to produce a transaction than it used to.”

‘Though the pandemic may be ending … travel is still more complicated than it’s ever been to book.’Angie Licea, Global Travel Collection

“You’re in a situation where the value proposition of using an advisor gets reduced,” he said. “And even though we are incredibly valuable to the client when things occur, the problems we encounter are that we’re stuck. We can’t fix catastrophe. We normally can fix catastrophe, but lately it’s been hard to fix problems that just didn’t exist before.”

‘Even though we are incredibly valuable to the client when things occur, the problems we encounter are that we’re stuck.’Stephen Scott, Travel Hub 365

Travel may have begun to meaningfully recover, but Azure Blue’s Schreiner still preaches flexibility and preparation to her peers.

We’re not out of the woods just yet. We’re in recovery, but we’re not recovered.’Suzy Schreiner, Azure Blue Vacations

“We have to be prepared because we may see that all change and have to adapt again to travel restrictions come the fall and the next flu season,” she said. “We have this cloud following us that we have to be ready to adapt to at any time, because it’s just not smooth sailing yet. We’re not out of the woods just yet. We’re in recovery, but we’re not recovered.” 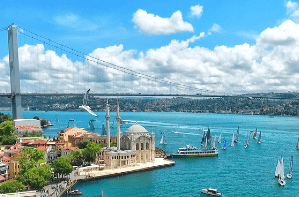 The World Travel & Tourism Council’s latest Economic Impact Report (EIR) reveals Turkey’s Travel & Tourism’s GDP is forecasted to grow at an average rate of 5.5% annually between over the next decade, more than twice the 2.5% growth rate of country’s overall economy.

A new kind of tourism: Virtual travel in the metaverse

You might not need to hop on a plane to travel in the near future. 5G can power a new kind of tourism, one that allows virtual travel to Venice, Seoul or even the Pompeii of the past.